The rock which are formed by cooling of magma are known as the igneous rocks.


• Plutonic rocks are formed due to cooling of magma at a considerable depth from earth’s surface. The igneous rocks commonly used in building industry are of plutonic type. Granite is the leading example of this type of rock.

• Hypabyssal rocks are formed due to cooling of magma at a relatively shallow depth from earth’s surface. The cooling is quick and hence, these rocks possess finely grained crystalline structure, e.g. Dolerite.

• Volcanic rocks are formed due to pouring of magma at earth’s surface. These rocks are extremely finding grained in structure, e.g.  Basalt.

These are formed by the deposition of products of weathering on the pre-existing rocks.

These a rock is formed by the change in character of the pre-existing rocks. The igneous as well as sedimentary rocks are changed in character when they are subjected to great heat and pressure. The process of change is known as the metamorphism. 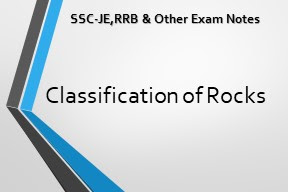 There are three agents of metamorphism, namely, heat, pressures and chemically acting fluids.

View all posts by admin →

Sutability of Stone for various types of construction.

Tests for the acceptance of bricks for building construction