Skip to content
June 1, 2020
Uncategorized
6. In the design of bridge arguments what considerations should be made to select the orientation of the wing walls?

Some of the most common arrangements of wing walls in cases of bridge arguments are as follows:

Wing walls parallel to abutments: This method is considered to take least amount of time to build and is simple as well. But on the downside this method is not the most economical. The advantage of this type of design being that they cause the least amount of disturbance to the slope embankment.

Wing walls at an angle to abutments: This design method is considered to be the most economical in terms of material cost.

Wing walls perpendicular to abutments: The characteristic of this design is it provides an alignment continuous with the bridge decks lending a support to the parapets.

7. In case if concrete box girder bridges how is the number of cells determined?

But in case the depth of the bridge is lower than 1/6th of the bridge width then a twin-cell or in some cases multiple cell is the preferred choice. One should also note that even in the cases of wider bridges where there depths are comparatively low the number of cells should be minimized.

This is so as there is noticeably not much improvement in the transverse load distribution when the number of cells of the box girder is higher than three or more.

8. Under what circumstances should pot bearings be used instead of elastomeric bearings?

This is not possible to maintained in high load and rotation environment. Also the usage of elastomeric bearings leads to the uneven distribution of stress on the piers. This results in some highly induced stresses to be targeted at the piers henceforth damaging them.

Due to the above reasons pot bearings are preferred over elastomeric bearings in such cases.

9. Why should pumping be not used in case of concreting works?

Since only water is pump able, all the pressure generated is by the water that is present in the concrete. The major problem due to pumping are segregation effects and bleeding. In order to rectify and reduce these effects, generally the proportion of the cement is increased in order to increase the cohesion , which leads to the reduction of segregation and bleeding.

Also if a proper selection of the aggregate grading can vastly improve the concrete pump ability.

10. Why should curing not be done by ponding and polythene sheets?

The primary purpose of curing is to reduce the heat loss of concrete that is freshly placed to the atmosphere and in order to reduce the temperature gradient across the cross-section of the concrete. Ponding is not preferred for curing as this method of thermal curing is greatly affected by cold winds. In addition to that in ponding large amounts of water is used and has to be disposed off from the construction sites.

Polythene sheets are used on the basis that it creates an airtight environment around the concrete surface henceforth reducing the chances of evaporation over fresh concrete surfaces. But the usage of polythene can be a drawback as it can be easily blown away by winds and also the water lost by self-desiccation cannot be replenished. 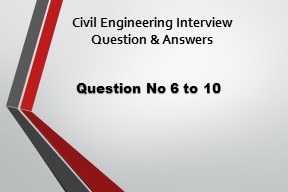 View all posts by admin →

How to prepare Abstract of Estimate

Different Types of Doors Based on the Mechanism & Usage